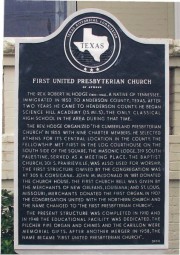 The small congregation's first church building was built in 1881.  It was located on East Corsicana Street immediately south of the location of the present First Presbyterian Church, which faces East Tyler Street.  During the interim of 26 years following the church's founding in 1885, the congregation held its worship services in three locations that were the property of others.  Rev J. M. Brooks was serving the church as its pastor in 1881.﻿

Shelby Chapel that is located three miles north and east of Athens on the Ash Switch Road was built in 1895.  Its members carried on the roll of the Athens Church for many years and the pastor of the Athens Church served as their minister.  A number of years ago, the two congregations, amicably, dissolved their association and Shelby Chapel now serves as a non-denominational church.﻿

The church has owned several manses over the years beginning very shortly after the church was founded.  A manse on East Corsicana Street that the congregation built in 1947 was sold in the mid 1970s.  The present manse is located at 1013 Crestway Dr. and was given to the church by Mary Quesnel in 1998.﻿

In 1981, with a need for more Sunday school classrooms and other facilities, the congregation debated whether to relocate and build an entirely new facility or to remain where it was and continue to occupy its beautiful seventy-one year old sanctuary.  It would be necessary to remodel the sanctuary and to remodel and enlarge the education building, which had been constructed in 1948. The decision was made to remain in the same location and the property was remodeled and enlarged.  In 1991 the sanctuary was remodeled again and the Ross King organ was dedicated.  On June 9, 2000, the members marked the 90th anniversary of the dedication of the present sanctuary.

To help meet the current growing need for space for new programs and additional classes, the property on East Corsicana that housed Lone Star Gas Company for many years was purchased in 1998.  Additional property at the corner of East Corsicana and North Carroll was bought for future expansion.  The former Lone Star building is now the Cain, Coleman, Denius Fellowship Building.  It is used for large group activities, Sunday morning classes and as a practice area for the Peg Cain Handbell Choir.

Part-time ministers served the church for the first 46 years. October 1, 1901, Rev. R. W. Benge became the first installed pastor of the congregation. Dr. William “Bill” McNatt served the church as pastor for 16 years and left at the end of 1991.  Rev. Jim Brown who served as the interim pastor for 18 months followed Dr. McNatt.  Dr. William A. “Bill” Watson, a native of Scotland became the pastor on July 1st, 1993 and retired in 1999.  The church was then served by The Rev. Thomas Loden as interim pastor through December of 2000. Rev. Dr. Joe Warren was called as full time pastor on December 31, 2000 and served our congregation unitl August 31, 2011.  During the last few years, our church has grown significantly in number.

We have new programs for congregational care including the Sally Soup Ministry, in which church members prepare food for those who are recuperating from illness.  Volunteers then deliver the food to those members and visit with them.  Through the Congregational Concerns Committee, birthday cards are sent to members, and cards are sent to those on our prayer list.  The Pastoral Care Ministry is administered through this committee.  It utilizes church members to care for other church members during times of illness, bereavement, or special needs.  There is another group that contacts the members of our church just to see if there are any special needs the church family can meet.  Visitors to our church receive freshly baked bread as a way of welcoming them to our church.  Many volunteer opportunities are available for members.  Any talent you wish to share can be put to use in our membership.